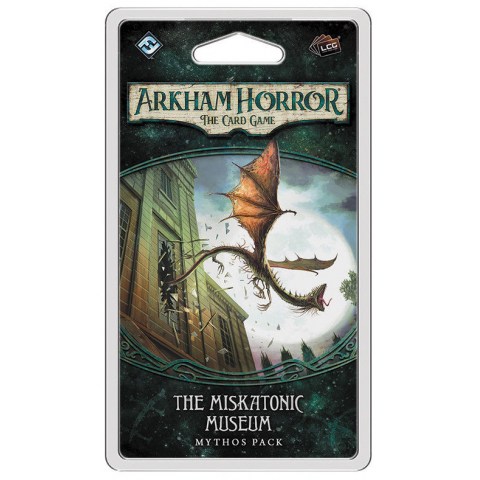 "Almost eight feet tall, and carrying a cheap new valise from Osborn’s general store, this dark and goatish gargoyle appeared one day in Arkham in quest of the dreaded volume kept under lock and key at the college library—the hideous Necronomicon of the mad Arab Abdul Alhazred in Olaus Wormius’ Latin version."

The Miskatonic Museum is the first Mythos Pack in The Dunwich Legacy cycle for Arkham Horror: The Card Game, and it begins with a book…

Somewhere in the Miskatonic Museum, Olaus Wormius’s Latin translation of a book called the Necronomicon lies hidden away, kept locked and secret so that those individuals who shouldn't gain access to it do not gain access to it. When recent events at the university and Clover Club lead you to believe that someone may now be searching for this strange and ancient tome – someone who should not be permitted to delve its secrets – you make your way to the Museum. The hour is late, and the place is locked. But you know you must recover the book before anyone can access its arcane secrets for dark purposes.

The cards and adventure from The Miskatonic Museum grant you access to the Museum and its many exhibitions even while the expansion's twenty-six player cards (two copies each of thirteen different cards) vie for your attention. Will you make use of these cards? How will you make use of them? Several of the cards offer a remarkable focus on long-term benefits over short-term returns, and you'll have plenty of time to incorporate them into your Arkham LCG® campaigns – provided you first succeed on the task at hand. After all, there's something else stalking the museum's exhibits…

This is not a standalone product. It requires the Arkham Horror: The Card Game Core Set and The Dunwich Legacy deluxe expansion to play.