Home/
Board Games
/
Strategic Games
/
Blood Rage
/Products by Cool mini or not in Blood Rage/Blood Rage: Mystics of Midgard Expansion
5 of 5 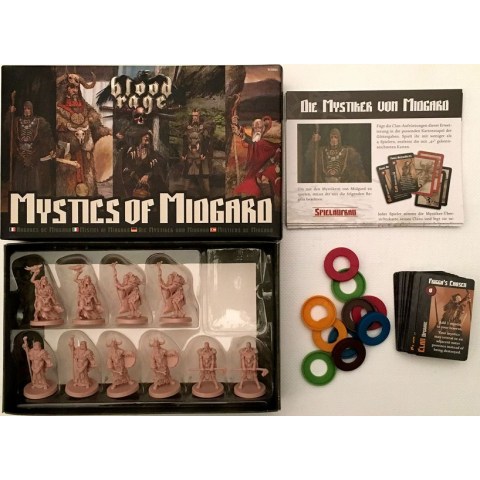 Known by many names (Seiðmenn, Völva, Vísendakona, etc.) and possessed of different powers granted by their connection to the gods, these warrior-shamans will be a boon to any clan able to recruit them!

Mystics are special units (neither Warrior nor Monster) that players can only employ once they've given their clan one of the Mystic Clan Upgrades. Each of these Clan upgrades adds 1 Mystic figure to your clan's reserves, which you can then use to Invade and battle normally. All Mystics have STR 2 and the special ability that allows them to Invade at no Rage cost. Clans are only able to recruit a maximum of 2 Mystics.

Besides adding Mystics to your reserves, each of these Clan Upgrades grants your Mystics a special ability. If you collect several different upgrades, each of your Mystics will posses all the abilities you accumulated, making them incredibly resourceful and strategic additions to your clan!