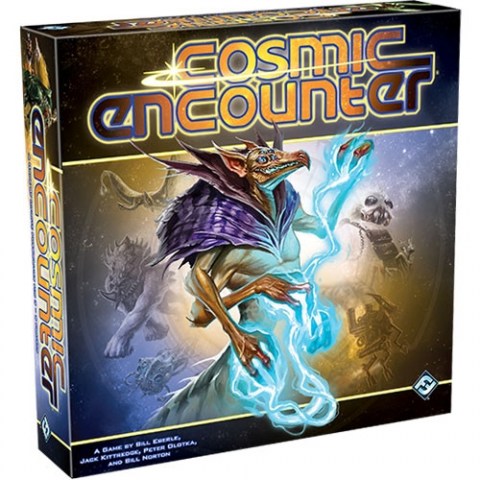 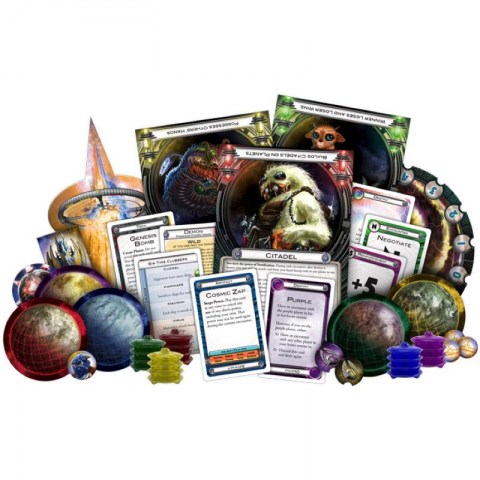 In the far reaches of space, the aliens of the cosmos vie for control of the universe. Alliances are constantly forged and broken in the pursuit of power as starships journey from planet to planet, ready to build colonies and battle foreign powers, ensuring the survival of their people as they spread throughout the stars. Fantasy Flight Games is proud to announce the upcoming release of Cosmic Encounter 42nd Anniversary Edition!

Now is the perfect time to return to Cosmic Encounter or to experience the classic game of intergalactic colonization for the first time. Cosmic Encounter 42nd Anniversary Edition will become the new standardized version of the game when it hits shelves in the third quarter of 2018, and it remains compatible with all existing Cosmic Encounter expansions. To see the exciting changes that await, read on!

At the dawn of a forgotten age, the Precursors sought intelligent life in the cosmos, only to discover that they were alone. Feeling the weight of their solitude, they sent the seeds of life to thousands of planets in the hope that sentience would follow. But before they could see the fulfillment of their legacy, they disappeared.

Now, the species that sprung from the Precursors' efforts populate thousands of solar systems, with only the remnants of their creators’ technology to guide them. Without the guiding hand of the elder race, these aliens fall to squabbling amongst themselves and battle for supremacy over the stars. In Cosmic Encounter 42nd Anniversary Edition, as in previous editions of the game, you're invited to become the leader of your own unique alien species, seeking to expand the reach of your civilization across the cosmos. You will launch the spaceships of your fleet through the Hyperspace Gate to reach planets beyond your home system where, with your own cunning and a bit of luck, you just might establish a colony. If you can successfully establish five of your colonies on foreign planets, you will earn victory and your species’ supremacy will be assured!

As you attempt to colonize beyond the reaches of your home system, you will quickly find that every planet is controlled by someone. In Cosmic Encounter, the planets you target for your colonies are determined by Destiny cards, meaning you may be sent to the home system of a loyal friend or a dire foe, and alliances can shift in an instant. If you wish to establish a colony, you must win over the ruling species, either by negotiating a peace or engaging in conflict. If you succeed, you move closer to victory, but if you fail, you risk not only falling into obscurity, but also falling into the black abyss of space!

Cosmic Encounter is a competitive social game, where diplomacy is every bit as important as numerical strategy. Once you launch your spaceships, you can ask the other players at the table for support in your campaign… but of course, they each have their own goals, and their investment may cause you more harm than good. After the attackers and defenders are declared for conflict or a peace has been negotiated, you and the ruler of your target planet each select an encounter card and play it facedown.

No encounter takes place solely between two players, of course. At this time, every player can weigh in, using their Alien Powers, Artifacts, Reinforcements, or Flares to tip the odds in one side’s favor, allowing alliances to be forged and broken between anyone who wants to be part of the action. If your fleet wins the encounter, you may establish your colony, but if you lose, your ships may be sent into the Warp, trapped until you find a chance to rescue them! The back-and-forth action, surprising moves, and treacherous backstabs of Cosmic Encounter take center stage as every species struggles for supremacy, and we'll take a much closer look at these encounters in future previews!

Cosmic Encounter 42nd Anniversary Edition welcomes new players to the game of infinite possibilities with a freshly revised rulebook and a beautifully illustrated Quick-start Guide that captures the nostalgia of the original game and makes it easy for anyone to learn. The Quick-start Guide’s comic book style throws readers back to the 1970s, providing vital insight into the core rules of the game while embracing the fun of a cosmic conquest filled with wacky aliens and outrageous abilities. What's more, with the beautiful translucent ship pieces (as shown above), spreading your colonies across the galaxy has never been more stylish!

A newly discovered species joins the classic line-up of aliens. You can, of course, play as old favorites such as Mite or  Remora,   or you can try your hand at leading the ruthless Demon to victory. Previously only released at Cosmic Con, this species was exiled from their original galaxy for unprincipled opportunism. Now they seek cosmic vengeance, using their power to possess other players’ hands to bolster their own strength and sap others’ will to win.

In addition to this monstrous newcomer, Cosmic Encounter 42nd Anniversary Edition offers you new ways to customize your games with the introduction of Cosmic Combo cards. These carefully assembled cards offer a list of alien species with a brief description of their powers to create themed matchups and explore different types of games. You may find yourself among some  Big Time Clubbers or Cellar Dwellers,  that can be integrated into three, four, or five-player games. Every card spins a new challenge, and with these new options for customization, no two games are ever the same.

The infinite possibilities of the cosmos lay before you. Forge your alliances, plan your betrayals, and expand your civilization’s reach to the farthest star.