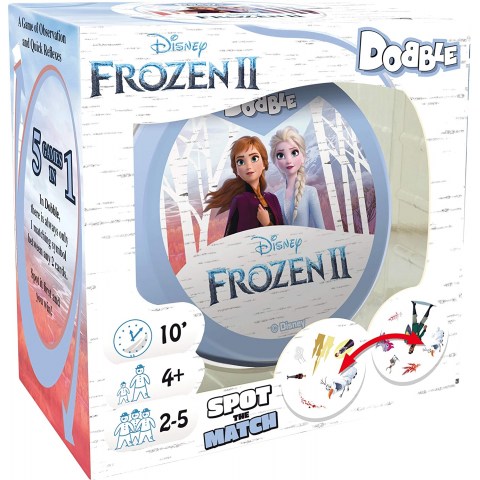 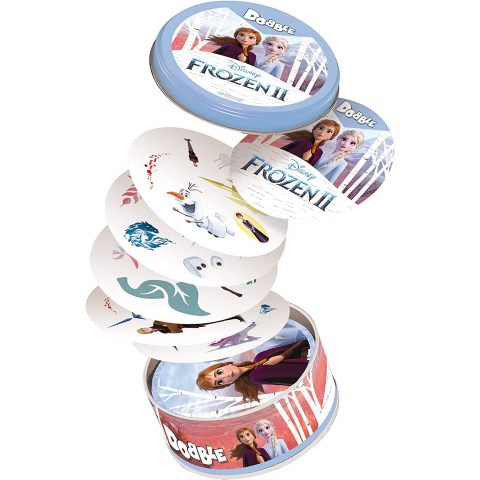 Does Dobble: Frozen II venture into the unknown? Not at all! This super-popular matching game from Asmodee meets the phenomenon that is Disney’s Frozen franchise. Can you match the likes of Elsa, Anna, Kristoff, Olaf and Sven in the brand-new glistening Dobble: Frozen II? This is an easier variant for younger players, to match the theme.

Dobble is the game of quick reactions and matching pairs. In this variant, the pairs are all your favourite characters from the Frozen II movie. There’s also winter-themed images such as frosty leaves and shivering trees. Dobble is one of Asmodee’s more simple games, but also one of its universal, popular ones. Circular cards, with a whole bunch of different images on them. Can you be the first one to locate a pair of Arendelle images that sit on both your card, and the top card?

Dobble sounds like a simple form of ‘Snap’, but in the heat of the moment, the tension can get the better of you. Not to mention the lightning-quick reactions of the other players! Every one of the 30 cards is unique, but each one has an image on it matches one other card in the deck. There are five different variants you can play, but all are about whoever has the quickest eyes.

Each of the cards in Dobble: Frozen II have six different images on them. There’s five different variants/modules to play. They all revolve around matching symbols, though. The trick is to locate one image on the top face-up card, with one that matches on your own card. Then it’s a case of being quick enough to shout out the name of said image, and slap your hand down!

There’s fewer images per card compared to regular Dobble, so it’s easier for little eyes to digest everything that’s going on. Dobble takes 20 seconds to teach, and will have you and your family in fits of giggles. Especially when your hand-eye observation skills fail you!