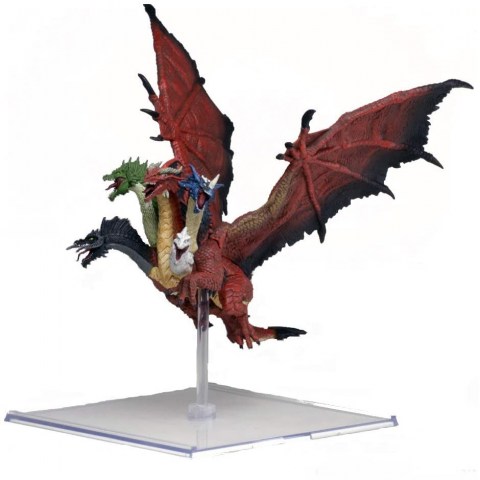 Tiamat the Dragon Queen is the chief deity of evil dragonkind. She dwells on Avernus, the first layer of the Nine Hells. As a lesser god, Tiamat has the power to grant spells to her worshipers, though she is loath to share her power. She epitomizes the avarice of evil dragons, believing that the multiverse and all its treasure will one day be hers and hers alone.

Tiamat is a gigantic dragon whose five heads reflect the forms of the chromatic dragons that worship her - black, blue, green, red, and white. She is a terror on the battlefield, capable of annihilating whole armies with her five breath weapons, her formidable spellcasting, and her fearsome claws. Tiamat's most hated enemy is Bahamut the Platinum Dragon, with whom shes shares control of the faith of dragonkind. She also holds a special enmity for Asmodeus, who long ago stripped her of the rule of Avernus and who continues to curb the Dragon Queen's power.