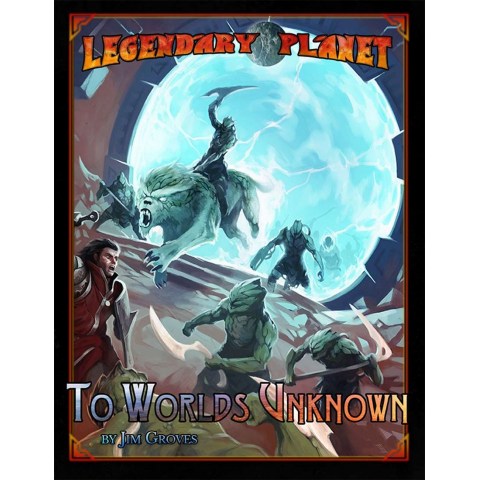 To Worlds Unknown is an adventure for 2nd to 5th-level characters which can be played as a standalone adventure or as the first main chapter in the Legendary Planet Adventure Path, bringing your heroes into the midst of a battle beyond the stars for supremacy over myriad alien worlds and alien cultures. Against the backdrop of great powers both ancient and new, small-time power players and petty criminals vie in the grungy back alleys of a crossroads world, and the heroes must discover who can help them find their way to safety through an impossible network of planetary portals before their erstwhile allies betray them to those whose secret schemes are far more sinister.

If played with the prelude adventure, The Assimilation Strain, the heroes may hail from a typical fantasy world, dropping them like fish out of water into an amazing and exotic world beyond anything they ever knew existed, but it can be played just as easily with To Worlds Unknown as the starting point for adventurers who have long lived among the far-flung worlds of this interplanetary society. Either way, your heroes will be propelled into a fantastic universe of exotic pulp adventure as the sword and planet genre comes to life on Legendary Planet!

- "To Worlds Unknown," a Pathfinder adventure for 2nd to 5th-level characters by Jim Groves

- A collection of "Alien Treasures" by Jim Groves and Jeff Lee, including mundane and magical items from deathbloom nectar to the rejuvenation vine and skystrider harness.

- A gazetteer of the planet Argosa, "World at the Crossroads," by Jim Groves, Jonathan H. Keith, and Andrew Christian.

- A detailed examine of the 20 deities of the "Planetary Pantheons" by Sean K. Reynolds

- And last but not least, "The Treasure Within," the first chapter in a 7-part short story by award-winning author Chris A. Jackson

The Legendary Planet Adventure Path includes the 1st-level prequel adventure The Assimilation Strain and the following adventures:
#1: To Worlds Unknown (2nd to 5th level)
#2: The Scavenged Codex (5th to 7th level)
#3: Dead Vault Descent (8th to 10th level)
#4: Confederates of the Shattered Zone (11th to 14th level)
#5: The Depths of Desperation (15th to 16th level)
#6: Mind Tyrants of the Merciless Moons (17th to 18th level)
#7: To Kill a Star (19th to 20th level)