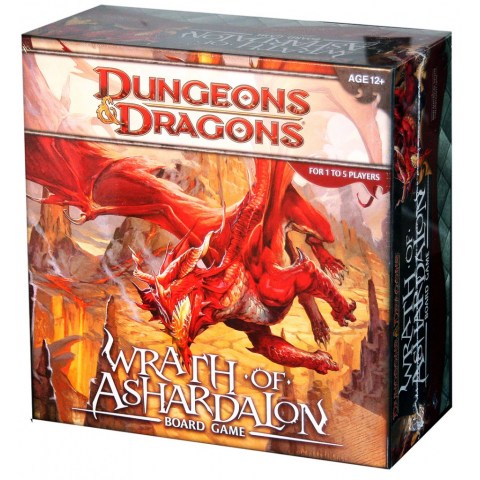 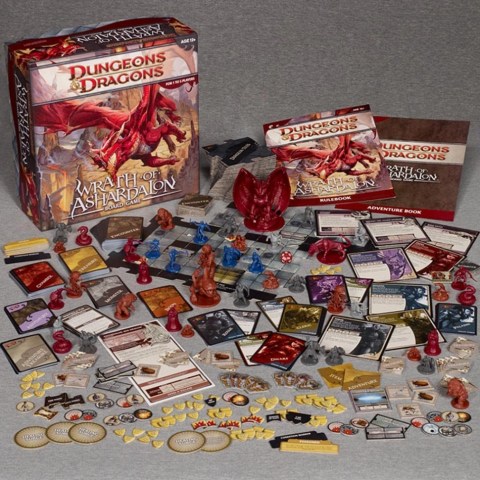 A cooperative game of adventure for 1-5 players set in the world of Dungeons & Dragons.

A heavy shadow falls across the land, cast by a dark spire that belches smoke and oozes fiery lava. A cave mouth leads to a maze of tunnels and chambers, and deep within this monster-infested labyrinth lurks the most terrifying creature of all: a red dragon!

Each player selects a hero; a rogue, thief, warrior, cleric, or wizard. On their turn, each player can explore further into the dungeon (turn over new tiles), move through the already explored parts of the dungeon, and fight monsters. When a new dungeon tile is revealed, there is typically an encounter of some sort, and new monsters to fight are added. Slain monsters reward the players with treasure, and experience points, allowing them to level up and increase their skills during play. Players must cooperate to stay alive, slay the monsters, and achieve the goal of their quest. Each scenario has a different goal - from retrieving a relic, to slaying a vampire lord.


All D&D Adventure System Cooperative Play Board Games can be combined to create an even more exciting experience!

If you haven't explored, roll 12+ for not drawing an encounter card. If you haven't explored and attacked draw encounter without rolling.
(On special encounter in play encounter cancelation rices by 3)
A new tile with a white arrow allows you to continue your movement and even attack. (If it's ranged, you can only attack with range attack immediately!)
You can't explore more than once per turn.
Being attacked when behind corned gives you cover 1AC.
Moving diagonally through corners or squares with graphics costs 2 movement points.
Range attacks need a clear line of sight that can be blocked by both heroes and enemies.
(ranged enemies can move sideways before attacking)
Even heroes can damage each other. (friendy fire by both sides of area damage attacks)
Monsters can be hit by traps and some events.
Disabling a trap gives you 1 XP.
Limit for items 4-5.