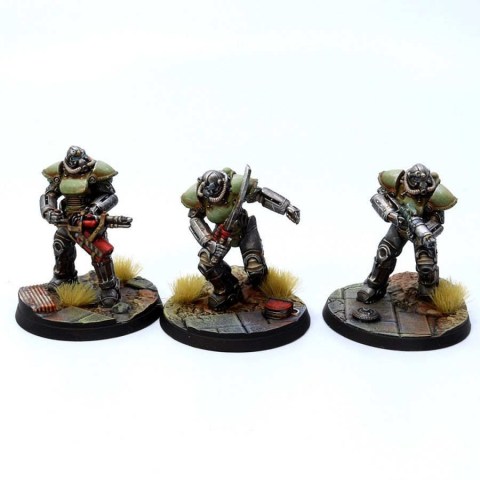 T-51 Power Armor was the peak of armor technology before the Great War, and remains one of the most iconic sets of personal-protective exo-suit plating in the wasteland. The next generation after the prototype T-45, this durable exo-suit was deployed first to take back Anchorage and then into the heart of China in America's counter attack. The armor platforms were so effective in close support and heavy weapon deployment that they are credited with turning the tide in Alaska for the American forces. More rare that T-45 suits, the T-51 is hardier and more mobile in every way. A stable platform for heavy weapons, and a bulwark against all but the most concentrated fire, suits of T-51 armor are sought after prizes in the post nuclear world. Few can hold the line against the relentless assault of a warrior clad in this armored shell, with even bulky Super Mutants and chem crazed Raiders thinking twice before standing in its way.

Miniatures are supplied unpainted. Preparation and assembly may be required.