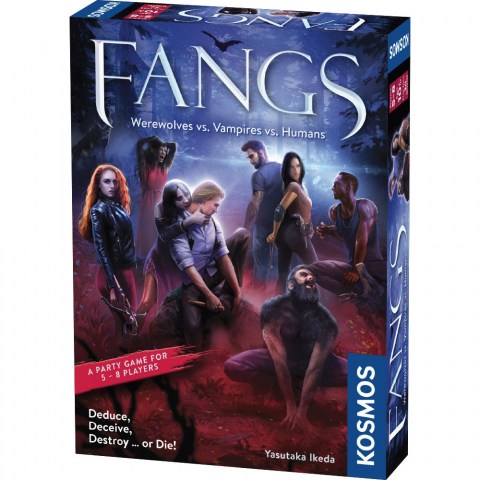 Fangs is a re-implementation of the social deduction game Shadow Hunters. Players are secretly dealt characters that belong to one of three teams: vampires, werewolves, or humans. The vampires and werewolves win by destroying the other team, while the humans are generally trying to simply stay alive (though some characters may end up aligning with one of the other two teams).

Since everybody starts knowing only who they are, they must start working on deducing who the other players are and whether they are friend or foe. Acting quickly may help you gain an advantage by weakening the opposing team before they realize which of the players fighting is their ally, but moving hastily with limited information may see you accidentally eliminate a teammate and set your side back in the conflict.

On each turn, players either try to gather information, find new equipment, or try to harm (or aid) another player. Different areas of the map influence what you may discover and who you may interact with while certain cards and abilities mean you can never be certain that things will go according to plan.