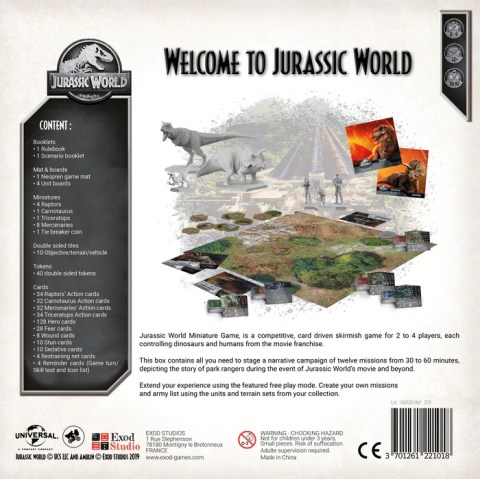 Welcome to Jurassic World, a miniature game from 2 to X players. Choose a scenario and your army of dinosaurs or heroes from the movie saga. Build your decks of action and hero cards accordingly. Feel the thrill of brutal combat between dinosaurs using unique and cinematic action card mechanics. Plan your actions by placing cards in sequence while guessing your opponent's ones. Alter effects or sequence by well-timed hero cards to tilt the tide of battle in your favor.

This game has the ambition to immerse its players in the universe of franchises Jurassic World and Jurassic Park. Thus it genuinely reproduces the skills, characteristics, and specificities of the dinosaurs and heroes with whom you will play. For instance, the raptor is fast, agile and clever though fragile. Whereas the Triceratops is excessively slow but tough as nail Also it can inflict massive damage for those who make the mistake to remain in their way.

Jurassic World™ Miniature Game brings in-game mechanics and objectives to avoid ending in a simple deathmatch. Winning will be possible without eliminating your opponents, through crippling debuffs, clever use of fear or simply precise shots of sedative darts.
Jurassic World ™ Miniature Game reinvents the game turn which is not just one side then the other or alternated activations.
Each unit possesses a unique Action cards focused on movement, attack, defense or support.