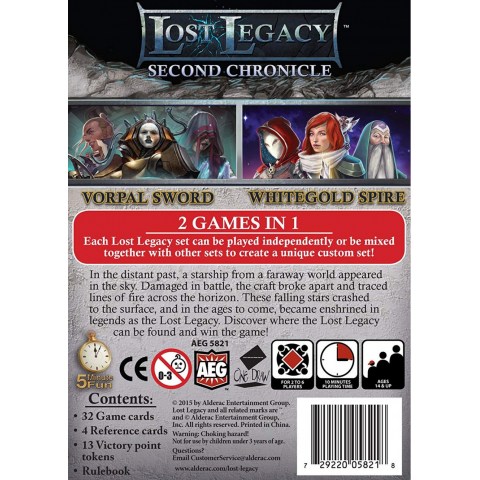 In the distant past, a starship from a faraway world appeared in the sky. Damaged in battle, the craft broke apart and traced lines of fire across the horizon. These falling stars crashed to the surface, and in the ages to come, became enshrined in legends as the Lost Legacy. Discover where the Lost Legacy can be found and win the game!

Lost Legacy: Second Chronicle contains two sets of game cards: Vorpal Sword and Whitegold Spire. Each set can be played independently or mixed together with other sets to create a unique custom set.

As for how to play, Lost Legacy is a game of risk, deduction, and luck for 2–4 players. You start the game with one card in hand from a deck of sixteen cards. On a turn, you do the following:

By combining different Lost Legacy sets (while keeping only a single Lost Legacy card in play), up to six players can compete at the same time.