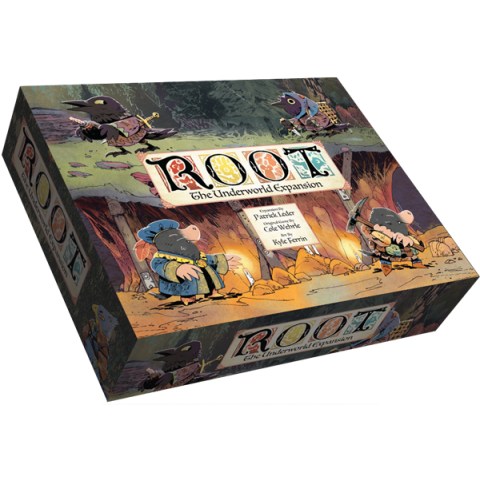 Return to the world of Root with The Underworld Expansion. Tunnel through the land as The Great Underground Duchy. Infiltrate the hands of your opponents with the Corvid Conspiracy. And, with two additional maps, new and experienced players have never had so many ways to explore Root!

Corvid Conspiracy
The Corvid Conspiracy ransoms the hands of their opponents by filling them with their agents. Using these agents, the Corvids can trigger insidious plots and advance their own agenda. But as each plot comes to fruition, their hideout must move to a different forest in the Woodland before their great conspiracy is unmasked!

The Great Duchy
For generations the Duchy extended its reach through the caverns below the great woods. Now, newly elected lords in the Duchy's Parliament have raised a call to explore the lands above. Armies have been mustered and new tunnels prepared for the coming struggle. The creatures of the woods will soon learn to fear the great power beneath their feet.

Lake Map
The conflict moves west to the homeland of the Riverfolk! Battle for control over the great lake by skillfully managing the ancient riverboat. Shore up your coastal clearings or explore the hinterland in the hills beyond.

Exiles & Partisans
Swap out the game's original deck with this new set of cards, free to backers of Root: The Underworld Expansion. While the items to craft remain unchanged, players can develop over 20 new special powers. Recruit ex-Eyrie officers to help run your military operation, or dig your own tunnels through the Woodland!