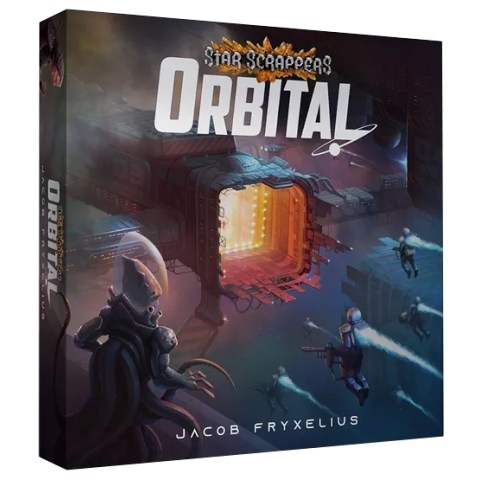 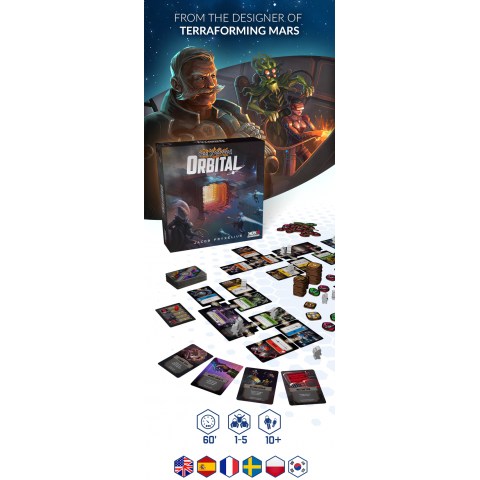 Star Scrappers: Orbital by Jacob Fryxelius, the designer of Terraforming Mars, is based on his Space Station card game, which has been mechanically streamlined, updated and re-themed to fit the Star Scrappers universe - a space western setting created and developed by Hexy Studio.

You start your space station (Orbital) with a core module tile on the table, then over five years (rounds) you expand it by paying and placing new module cards. Each year you start with a five card hand, crew tokens and new money, with the amount of crew and money determined by the structure of your orbital. You use money primarily to pay for new modules, and the crew gives you special effects on many of your modules.

During the year, the players take turns doing actions such as building, using module actions, playing event cards, repairing or passing. When everyone passes, the year ends and victory points are awarded: there are six kinds (colors) of modules and for each kind, the player(s) with the most modules of that kind is awarded a victory point. At the end of the fifth year, the player with most victory point wins.
Настолна игра за:
1-5 играча
Механики на играта:
Дължина на играта:
45-90 мин
Настолна игра за възраст:
10+години
Бордова игра от:
Hexy Studio
BoardGameGeek рейтинг:
8/10