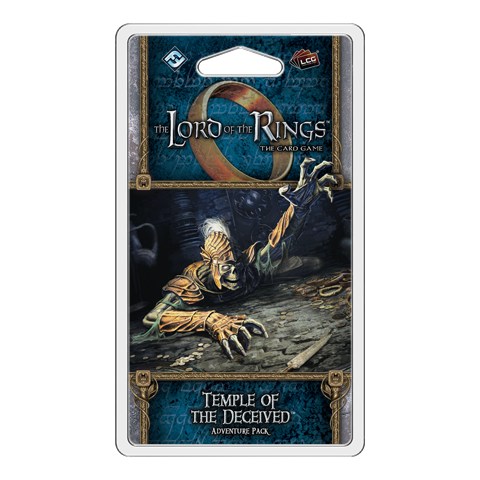 After a treacherous journey at sea, several of Middle-earth's greatest heroes arrive at a remote island, covered in mountains, jungles, and the ruins of a fallen civilization. Somewhere amid those ruins, a chest has lain locked and half-forgotten for untold ages. Now, with the key to that chest in their possession, your heroes must scour the island to find it, but their every step carries them deeper into the middle of uncharted natural dangers… and closer to the hordes of cursed dead that haunt the isle!

Temple of the Deceived is the third Adventure Pack in the Dream-chaser cycle for The Lord of the Rings: The Card Game. Its sixty cards include a new Leadership hero, twenty-seven new player cards (three copies each of nine different cards), and the core encounter set for a thrilling new scenario with innovative new mechanics that carry the game's fantastic explorations to all new heights!