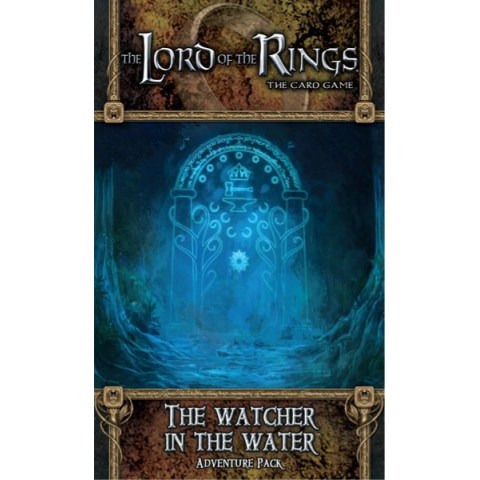 Frodo felt something seize him by the ankle, and he fell with a cry… The others swung round and saw the waters of the lake seething, as if a host of snakes were swimming up from the southern end.    –The Fellowship of the Ring

Elrond, the Elf Lord of Rivendell, is troubled by the great numbers of Orcs that plagued the heroes who escorted his daughter, Arwen Undómiel, across the Misty Mountains. He asks them to explore the mines of Moria, hoping they can determine if they are the source of the increased Orc activity, but before the heroes can explore Moria's vast network of tunnels, they must first gain entrance…

The Watcher in the Water combines tense combat with clever riddles as some of Middle-earth's greatest heroes must survive a ferocious battle with seething masses of tentacles long enough to discover how to open the Doors of Durin. The Watcher in the Water represents an action-packed turning point in the Dwarrowdelf cycle of Adventure Packs as the heroes seek to head into the dark and abandoned realm of Moria.

The Watcher in the Water introduces 60 new cards to the game, including a thrilling scenario, a new hero, and three copies of each player card.