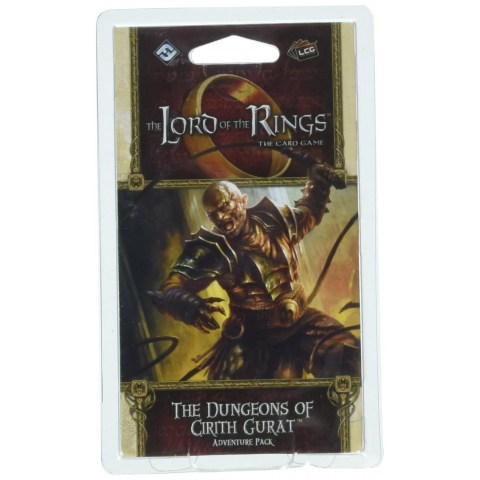 The Dungeons of Cirith Gurat is the fifth Adventure Pack in the Haradrim cycle for The Lord of the Rings: The Card Game.

With its sixty cards (including a new Lore hero and three copies of each player card), The Dungeons of Cirith Gurat finds several of Middle-earth's greatest heroes hundreds of miles from home, traveling through the hostile realm of Harad. They have crossed deserts, tamed Mûmakil, fled from Orcs on Wargs, and tunneled through a den of giant spiders. They have ambushed a caravan loaded with tithes meant for the Dark Lord of Mordor. And they have made allies along their way.

For much of their homeward journey, the heroes have been accompanied and assisted by the small band of Haradrim led by Kahliel (The Mûmakil, 1) and his lieutenants. Together, they have survived the perils of Harad's jungles and deserts. They have fought together and bled together, so when Kahliel learns that his tribesmen are being held prisoner in the "Iron Pass" of Cirith Gurat, the heroes don't hesitate to volunteer their swords. Their friends will be freed.

While the scenario from The Dungeons of Cirith Gurat leads your heroes deep into one of the Dark Lord's prisons, its player cards arm you for the battles to come. Once you spring Kahliel's tribesmen from prison, you'll need to fight your way free of Orc jailors and pursuers, and you'll be happy for the assistance of the Adventure Pack's new Weapons, Warriors, and events.q