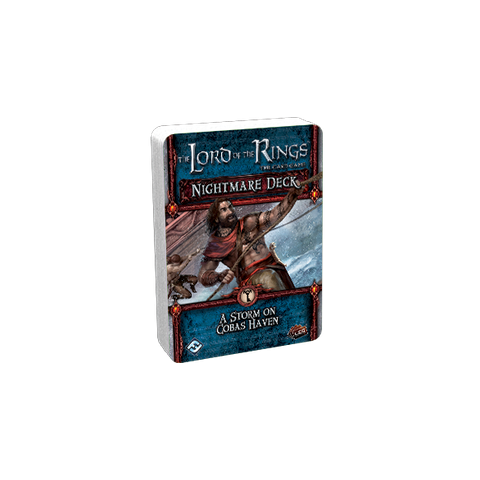 After a wearying journey across the sea, battling Corsairs, Monsters, and legions of the Undead, A Storm on Cobas Haven asks you and your noble team of heroes of to lend the remains of their strength to the citizens of Dol Amroth. In a city under siege by the Corsair fleet, you must fight ship-to-ship, using every ounce of your newfound nautical prowess to gain the upper hand and defend the citizens of Dol Amroth.

In the A Storm on Cobas Haven Nightmare Deck, the battle’s difficulty is increased tenfold as the invaders fill their ranks with more vessels like the Ramming Ship and you have less time to prepare a defensive plan. First, this Nightmare Deck introduces two new objective cards, and when your troupe of adventurers chooses an objective during setup, you must choose randomly among the six Dol Amroth objectives. Will you find the Ships you need to confront the Corsairs, or will each new objective simply destroy your will to continue as you attempt to both accomplish these tasks and protect the city?

Contains 20 cards to swap with specific cards from A Storm on Cobas Haven Adventure pack encounter deck to raise the difficulty of that scenario to nightmare difficulty.

This is not a standalone product. It requires a copy of The Lord of the Rings: The Card Game Core Set, The Grey Havens deluxe expansion, and A Storm on Cobas Haven adventure pack to play.