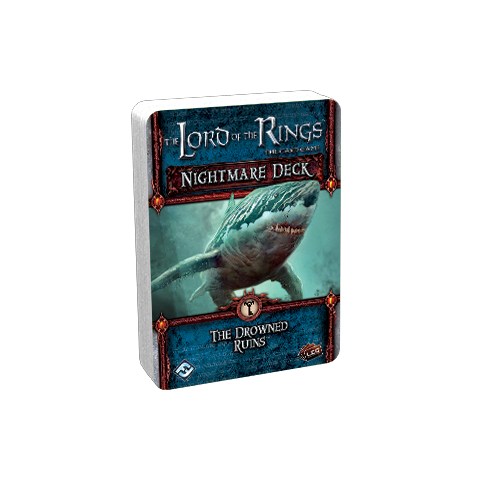 Marking the grand finale of the Dream-chaser cycle, The City of Corsairs Adventure Pack sends you to sea once more, charting a course for the lands of Umbar to retrieve your stolen artifact. But the relic has gifted your enemies with unnatural power, and they are not likely to surrender it willingly. Will you be able to defeat the Corsairs on their own land and end your quarrel with them for good, or will their increased strength prove too great an obstacle after the trials you have already endured?

The City of Corsairs Adventure Pack features two separate encounter sets, one for the land and one for the sea. Now, should you reach the shores of Umbar, The City of Corsairs Nightmare Deck increases the peril of the second encounter deck by adding treacherous new locations like the Umbar Bridge and bringing the pride and ruthlessness of the Corsairs to the forefront with cards like Inspiring Fury.

But by far the greatest enemy you will face in your quest is the very captain you have been chasing across the sea for the entirety of the Dream-chaser cycle. Should you dare to set foot on shore, you will come face to face with the dread Captain Sahír, now empowered by the dark energy of The Cursed Sword. This Cursed Item rewards the Corsair for his thirst for blood, granting him resources when he deals excess damage. Defeating a man with such a powerful weapon may prove nearly impossible, but you are bound by honor to end Sahír’s reign and make the seas safe once more!

Contains 20 cards to swap with specific cards from The City of Corsairs Adventure pack encounter deck to raise the difficulty of that scenario to nightmare difficulty.

This is not a standalone product. It requires a copy of The Lord of the Rings: The Card Game Core Set, the Grey Havens deluxe expansion, and The City of Corsairs adventure pack to play.

This is not a standalone product. It requires a copy of The Lord of the Rings: The Card Game Core Set and The Lost Realm deluxe expansion.