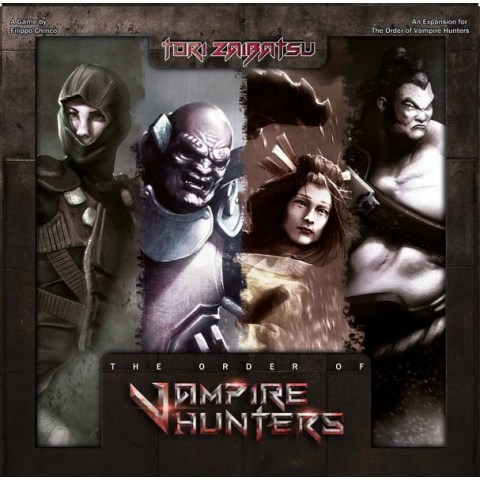 This Hunter set tells the story of Osamu Himori, the founder of Tori Zaibatsu, and his children.

Isamu glanced at Akihiko. “If this is for the family, perhaps Kukiko should be here.” His voice trailed away.

“No, little brother. You saw father’s instructions. We were to be alone when you open the box. We’ve been lieutenants in this company for long enough. Himori-san groomed us well to take over in his stead. Now, open it and read the will.” Akihiko’s voice was firm but he touched his brother’s wrist reassuringly.

Isamu gasped as he looked into the box. An antique tanto, stained with blood lay upon a handwritten page. This was clearly not the legal volume they were expecting to help them divide their father’s multinational.

Isamu gingerly extracted the page and began to read, “Sons, you have honored me, but I have misled you. I have hidden the story of my ancestors and you think your martial arts training was to give you discipline and honor in the boardroom. If I am not here to tell you the story myself, you will find this hard to believe. Now that Night has come, Tori is worthless compared to your true legacy...

Rai put down her pen and wondered how Osamu Himori’s children would react to the change. Like the rest of the world, they thought of her as Himori-san’s secretary. Would the truth be too much for them? Not all of Himori-san’s business dealings were above board, especially in the early days. Now there was more espionage than bone breaking, but no one suspected the woman taking notes at Himori-san’s side also managed Tori’s seedy underbelly. Forever Osamu’s confidante, she knew one day she might have to lead the boys on a much darker path than she had ever travelled. The Night ... who could believe those stories? And how could she keep poor Kukiko in the dark? She must never know what took her father and was bound to take her brothers.

Kukiko tapped her earpiece and put it on her dresser. Too strong to be pushed aside because she was a woman, she had taken her future into her own hands long ago. Some may call it spying, she preferred to think of it as preparation for her role in the family. She did not need to hear the rest of the will, she had discovered her father’s secrets long ago.

Mechanically, she applied her white face paint, a simple disguise she took from her name. She picked up her tessen and began her kata.