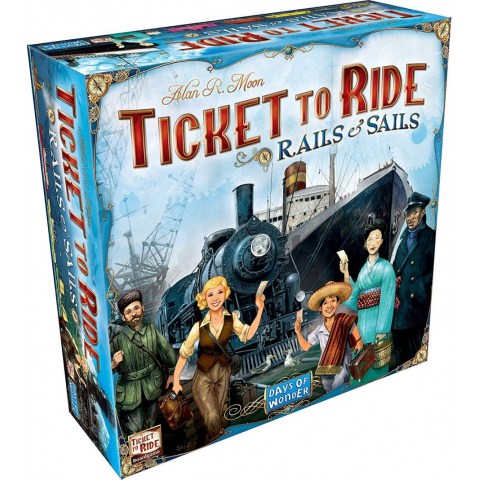 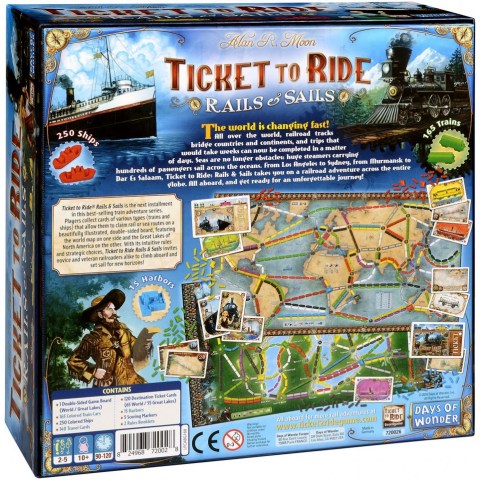 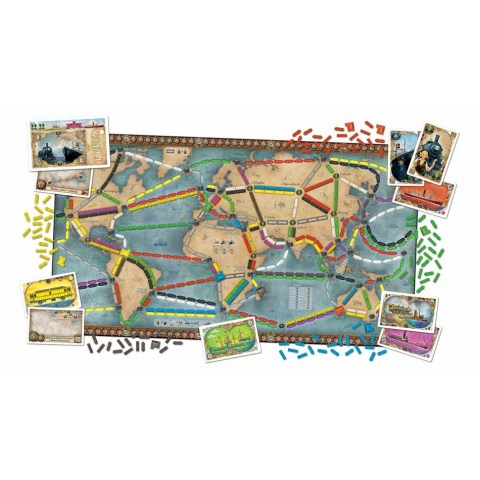 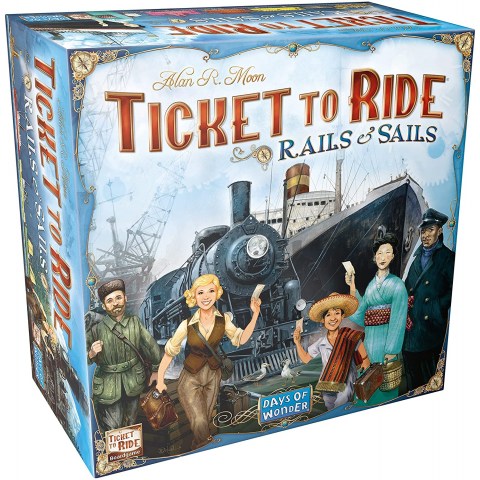 Ticket to Ride: Rails & Sails takes the familiar gameplay of Ticket to Ride and expands it across the globe — which means that you'll be moving across water, of course, and that's where the sails come in.

As in other Ticket to Ride games, in Ticket to Ride: Rails & Sails players start with tickets in hand that show two cities, and over the course of the game they try to collect colored cards, then claim routes on the game board with their colored train and ship tokens, scoring points while doing so. When any player has six or fewer tokens in their supply, each player takes two more turns, then the game ends. At that point, if they've created a continuous path between the two cities on a ticket, then they score the points on that ticket; if not, then they lose points instead.

Ticket to Ride: Rails & Sails puts a few twists on the TtR formula, starting with split card decks of trains and ships (with all of the wild cards going in the train deck). Three cards of each type are revealed at the start of the game, and when you draw cards, you replace them with a card from whichever deck you like. (Shuffle the card types separately to form new decks when needed.)

Similarly, players choose their own mix of train and ship tokens at the start of the game. To claim a train route (rectangular spaces), you must play train cards (or wilds) and cover those spaces with train tokens, and to claim a ship route (oval spaces), you must play ship cards (or wilds) and cover those spaces with ship tokens. Ship cards depict one or two ships on them, and when you play a double-ship card, you can cover one or two ship spaces. You can take an action during play to swap train tokens for ships (or vice versa), and you lose one point for each token you swap.

Some tickets show tour routes with multiple cities instead of simply two cities. If you build a network that matches the tour exactly, you score more points than if you simply include all of those cities in your network.

Each player also starts the game with three harbors. If you have built a route to a port city, you can take an action during the game to place a harbor in that city (with a limit of one harbor per port). To place the harbor, you must discard two train cards and two ship cards of the same color, all of which must bear the harbor symbol (an anchor). At the end of the game, you lose four points for each harbor not placed, and you gain 10-40 points for each placed harbor depending on how many of your completed tickets show that port city.

Ticket to Ride: Rails & Sails includes a double-sided game board, with one side showing the world and the other side showing the Great Lakes of North America. Players start with a differing number of cards and tokens depending on which side they play, and each side has a few differences in gameplay.