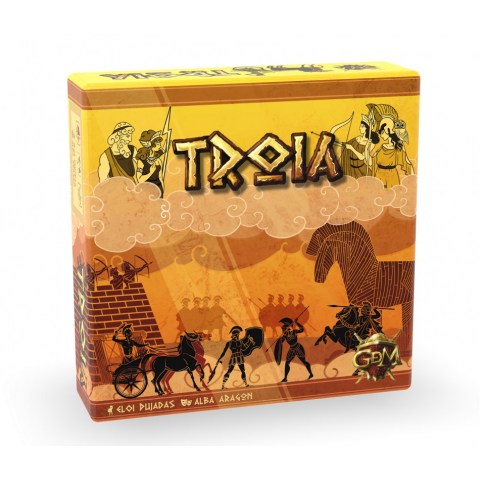 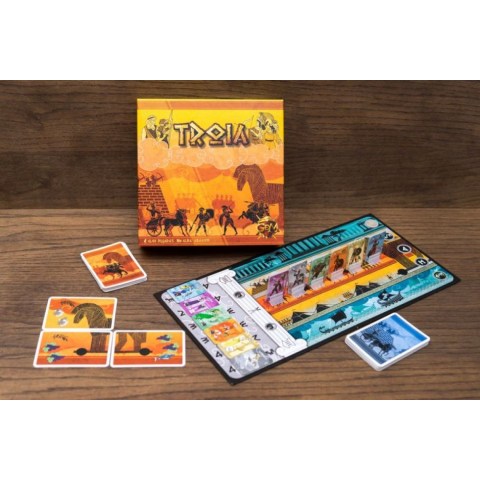 As Homer narrated in the Iliad, different Greek states had sieged the city of Troy for years as a punishment for the abduction of Helen of Sparta by Paris of Troy.
Citizens of both sides made offerings to the deities to gain their favour in order to help, or to hinder, heroes on the battlefield.

Players alternates turns offering to a chosen deity. That is, they must discard 1 or more cards from their hand until the offering is equal or greater than the number next to that deity (oriented to the active player) on the Olympus. At least one of the offerings must match with the chosen deity.

After the offering, the player gains that deity’s favour. And so that player moves the deity to their closest location on the Olympus, moving the other deities one position if necessary. A deity grants their special ability immediately.

Each hero is related to one deity. This connection is symbolised with an offering, which is different depending on the Greek or the Trojan side. The small offering represents the offering the opponent has on the other side.

If, at the end of the turn, a player has 2 or more heroes on the opponent’s Protection area can build the troja horse (greek player) or advance Hector throught greek ships (trojan player)

The Greek player wins the game immediately if they finish the Trojan Horse.

The Trojan player wins the game immediately if they move the Hector/Paris token through the four sections.