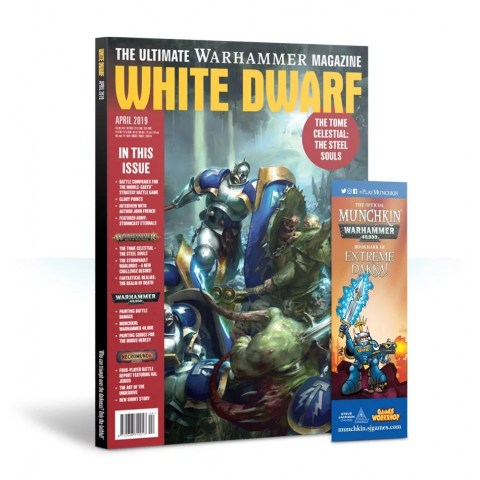 This issue includes a special gift – a bookmark for Munchkin fans that you can use in your Munchkin: Warhammer 40,000 games!

Here’s what you can look forward to in April’s issue:

Grimdark Munchkins
In the grim darkness of the far future, there is only killing the monster, stealing the treasure and stabbing your buddy!

The Horus Heresy Reading Order (Part II)
We examine the second half of the definitive guide to Horus Heresy literature, leading all the way up to…

The Siege of Terra
Black Library author John French talks about the upcoming Solar War novels set to draw the bestselling series to a close.

The Realm of Death
Part IV in our series of modelling and painting guides for the Mortal Realms – this month, we look at Shyish!

The Stormvault Warlords
A Tale of Four Warlords is back… again! This time, it’s the turn of the Stormcast Eternals, Nurgle Daemons, Idoneth Deepkin and Gloomspite Gitz.

In Sigmarite Clad
Indulge in a stunning showcase of Stormcast Eternals by Oscar Lars.

The Tome Celestial
Take a detailed look at the Steel Souls Warrior Chamber of the Hallowed Knights Stormhost, including new background and rules for fielding them in battle.

Paint Splatter: Hallowed Knights
You've read all about the Steel Souls, now learn how to paint them with a handy stage-by-stage painting guide.

Echoes From the Warp
Robin Cruddace discusses the evolution of keywords and Stratagems, and what they mean for the game.

Weathering Masterclass
Mark Bedford and Phil Stutcinskas get down and dirty with some serious tank weathering.

Colours of Heresy
The Forge World team show how to paint eight crusading Legions from the Horus Heresy.

A Clash of Companies
Four generals assemble their Battle Companies and take to the battlefield for the start of a campaign.

Art of the Underhive
Enjoy a closer look at some of the finest Necromunda illustrations, with words from the artists.

Calling in the Hit
Four players battle it out in the underhive, where Bounty Hunter Kal Jerico has had a price put on his head…

In the Studio
What have the Design Studio’s hobbyists been up to this month?

Free Stuff!
April’s issue comes with an exclusive bookmark for Munchkin: Warhammer 40,000. It can even be used as a card in the game itself!
Бордова игра от:
Games Workshop