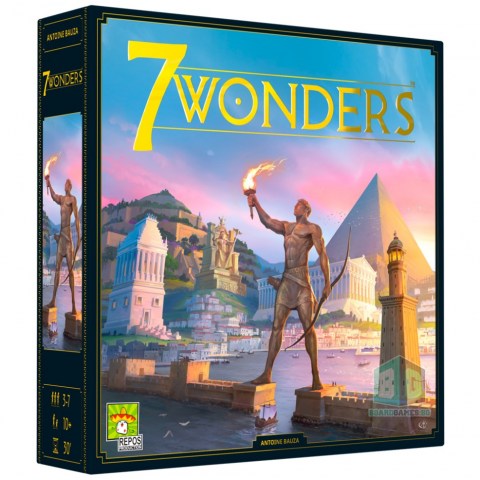 Take control of one of the great cities of the ancient world. Gather resources, develop commercial routes and affirm your military supremacy. Build your city and erect an architectural wonder which will transcend future times!

7 Wonders, one of the most acclaimed board games ever, returns with a gorgeous new edition.

WHAT’S NEW?
• The game received a complete visual redesign. The cover, the cards’ design, the Wonders, the insert: everything was redesigned!

• The rules have been entirely revised to make them more easily accessible to new players. Gone are the long pages to read; we now have an 8-page booklet that’s much easier to understand straight away! The player aid has also been fully redesigned.

• Card layout has been improved, which allows for information to be more easily read. The guild cards, spread out over the many 7 Wonders expansions, have been consolidated and added to the new basegame.

• Steps have been taken to improve immersion through the game’s titular theme – the Wonders themselves! The Wonders have been made bigger and more prominent, and their A and B sides have been replaced by a day side and a night side for a more flavourful experience. Both the base game and the expansions are also moving to larger, standard-sized boxes.

• Taking inspiration from chaining system from 7 Wonders Duel; instead of using named structures for chaining, the cards now have symbols. This streamlines chaining and makes it more intuitive.

• Thanks to symbols discreetly inserted in the contents of the game, 7 Wonders and its expansions are now adapted for colourblind players.

ABOUT THE GAME
You are the leader of one of the 7 great cities of the Ancient World. Gather resources, develop commercial routes, and affirm your military supremacy. Build your city and erect an architectural wonder which will transcend future times.

7 Wonders lasts three ages. In each age, players receive seven cards from a particular deck, choose one of those cards, then pass the remainder to an adjacent player. Players reveal their cards simultaneously, paying resources if needed or collecting resources or interacting with other players in various ways. (Players have individual boards with special powers on which to organise their cards, and the boards are double-sided). Each player then chooses another card from the deck they were passed, and the process repeats until players have six cards in play from that age. After three ages, the game ends.

In essence, 7 Wonders is a card development game. Some cards have immediate effects, while others provide bonuses or upgrades later in the game. Some cards provide discounts on future purchases. Some provide military strength to overpower your neighbors and others give nothing but victory points. Each card is played immediately after being drafted, so you’ll know which cards your neighbour is receiving and how his choices might affect what you’ve already built up. Cards are passed left-right-left over the three ages, so you need to keep an eye on the neighbours in both directions.