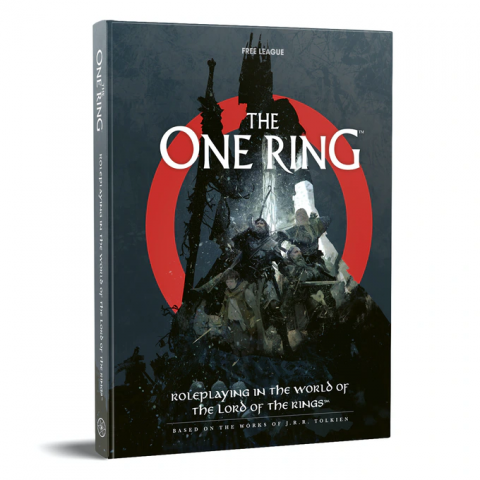 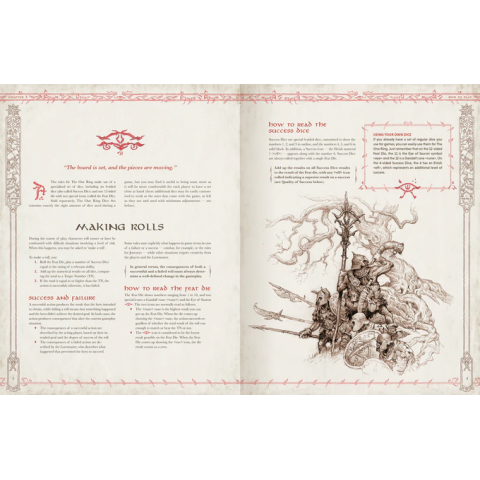 The One Ring™ is a roleplaying game based on The Hobbit™ and The Lord of the Rings™, two extraordinary works of fiction by the beloved author and respected academic, John Ronald Reuel Tolkien, published in partnership with Sophisticated Games.

First released in 2011, its award-winning design was hailed as the best attempt at bringing Middle-earth to the gaming table to date, thanks to its thematic rules and painstaking attention to detail. For 10 years, players of the game have traveled far and wide across Middle-earth, adventuring for multiple decades of game time.

Today, it is time for the game to enter a new era – this new edition of The One Ring brings players further into the Twilight of the Third Age with a new hardbound volume, presenting:

“The Enemy still lacks one thing to give him strength and knowledge to beat down all resistance, break the last defences, and cover all the lands in a second darkness. He lacks the One Ring.”

The One Ring is set in the Twilight of the Third Age, a time-frame comprising the events narrated in The Hobbit™ and the start of The Lord of the Rings™. Encompassing more than six decades, this period is ushered in when Bilbo the Hobbit finds the Ruling Ring, and culminates with the war fought by the Free Peoples against the Dark Lord Sauron, and the destruction of the Ring.

The year is 2965 of the Third Age, and the players create a Company of heroes, Hobbits, Dwarves, Elves and Men seeking adventure in the Lone-lands of Eriador. It is a desolate country, a vast land that once saw the glory of the North Kingdom of the Dúnedain, the Men of the West. Here, many wars were fought, and countless ruins dot its landscape. Shadows move along its paths, and not all of them belong to the living. It is here that the One Ring lies, a seed of the past that will one day lead the world to open war against the returning Shadow.

This edition of The One Ring moves the focus of the game to the lands of Old Arnor, with a full description of the town of Bree and the surrounding areas, including famous locales like Weathertop, Fornost and Annuminas, providing the players with a new starting point for their adventures.

The Enemy is moving, and smoke issues once more from Mount Doom, in the land of Mordor...