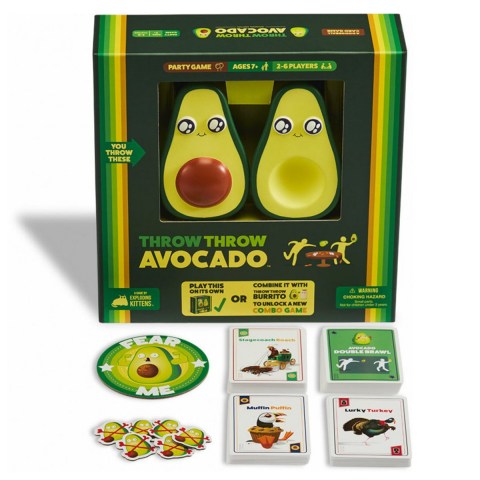 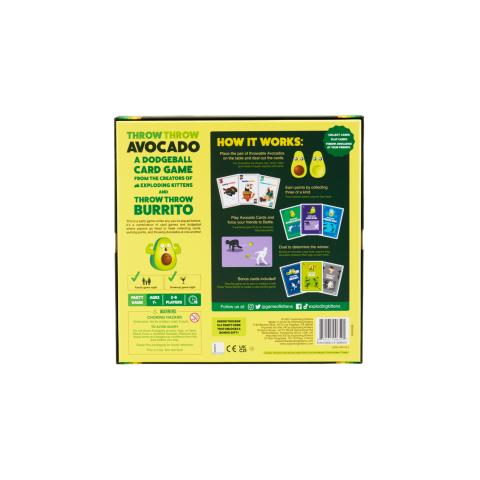 Throw Throw Avocado is unlike any game you’ve played before. In this dodgeball card game, go head to head with your opponents collecting cards while throwing and avoiding squishy, adorable Avocados. Play Throw Throw Avocado as a standalone sequel, or use the BONUS deck of cards included and combine them with the cards from Throw Throw Burrito to unlock a new combo game using all four throwables!

How it works: Place a pair of avocados on a table and draw cards. Keep your cards a secret. Rack up points by finding sets of three in the deck. Find matches before anyone else does. If someone plays Avocado Cards, a Battle ensues. Steal points from your opponents by hitting them with squishy toy avocados. Declare war on your friends. Some battles only involve a handful of players. Others force the entire table to engage in a Avocado War. Duel to determine the winner. During an Avocado Duel, two players must stand back to back, walk three paces, and FIRE.

There is no distinct turn structure. All players are picking and passing cards constantly, similar to Spoons. Once a player has a match of any of the varieties, play will change to the various Avocado Duels - Double Brawl, Legs Duel, Freeze War - where some or all players will throw the squishy Avocado at other players.

- A fun new sequel to Throw Throw Burrito, the world’s first ever dodgeball card game.
- Collect matching cards, earn points and throw Avocados at one another.
- Includes 120 cards, instruction manual, 6 Avocado Boo Boos, 1 Fear Me Badge and 2 foam Avocados soft enough to throw at your Great-Aunt Martha without feeling guilty.
- Includes a BONUS combo pack of 36 cards that can be combined with your Throw Throw Burrito cards to play the ultimate, epic combo game!